The Moopicarius Fecundus Research Institute (MFRI) was another manifestation of the Leave No Trace department of a small event production company based in Oakland, California.

At a festival in Northern California in 2017, the event site was transformed into a nature preserve for endangered mythical creatures, and home to the last remaining Sasquatch. The preserve brought in a unicorn to breed with the Sasquatch and stop the species from going extinct. Everyone knows that when a unicorn breeds with another creature, it will give birth to a new specimen of that creature.

In this setting, Meowtha imagined that the trash (known in the community as MOOP, Matter Out Of Place) on the ground was itself a species of animal whose Latin name was Moopicarius fecundus (MOOP, for short). Since the dawn of mankind, MOOPs have lived side by side with humans; where humans go, MOOPs go, and without humans there can be no MOOPs. But this weekend at the preserve, the balance was disrupted and an infestation was afoot! That’s where the MFRI, a crew of wacky naturalist types hell-bent on solving the mystery of the MOOP infestation, came in.

Meowtha played the character of Buck Dumper, the rough-n-tumble, gender-ambiguous, backcountry MOOP trapper, raised in the hills/plains/countryside of West Mississippigan/North Dakotauisianahio/any combination of “flyover state” names. Buck’s been trappin’ MOOPs since they were a kid, and they now hold an honorary PhD in biology from Prestigious University. Buck was a hillbilly stereotype and a brilliant naturalist and environmentalist, prompting people to question their stereotypes about backwoodsy types. Buck Dumper was joined by Irwina Stevens, the Steve Irwin -inspired MOOP huntress, Christoff Christeau, the underwater MOOP explorer, Sir Richard Winchester, a pith helmet -wearing British field biologist and knight, and Viktor “Vik” von Mulltaucher, the Austrian artist-naturalist determined to treat the MOOPs with the dignity and compassion they deserve during the process of relocation and study.

Together, the members of the MFRI hunted for MOOPs throughout the festival grounds, casually interacting with guests in character as they collected trash in pet carriers, ostensibly for relocation and further study but actually for transport to the dumpsters onsite. The MFRI also encouraged participants to “adopt a MOOP” (aka pack out litter they found on the ground, even if it wasn’t theirs), as most MOOPs are harmless and cute, and there sure were a lot of them needing homes! The focus of these playful interactions was to make participants aware of the principles of Leave No Trace and elicit their help in keeping the festival grounds free of trash.

The overall goal of the MFRI was to create a situation in which trash was a fun thing to interact with–not a shameful and unpleasant side effect of an otherwise pleasant festival experience. Through the MFRI, Meowtha sought to encourage participants to interact with their waste in a fun way, to play games with it and laugh about it, to pretend their beer can was an adorable animal purring in their hands rather than a hollow hunk of aluminum, to think about what they were leaving behind rather than just, well, leaving it behind.

At this festival, trash left on the ground was at an all-time low in the client’s event production history. Thanks, MFRI! 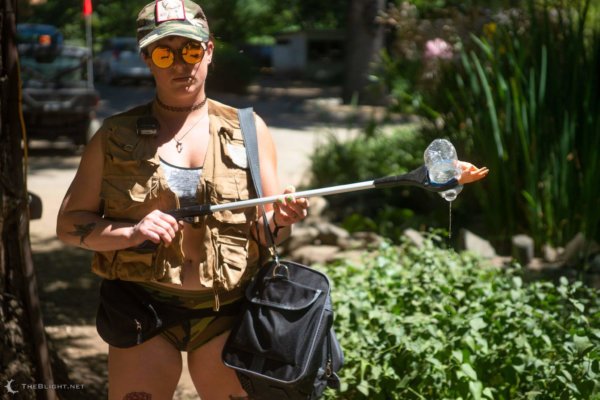